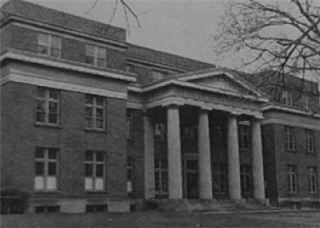 Dowling High School for boys was established in 1918 with an enrollment of 90 students on an eight-acre site purchased by Bishop Dowling from the Des Moines College Corporation.  Dowling was known as Des Moines Catholic College until 1935 when it was renamed for its late founder.
By 1938 enrollment had increased to 374. In 1941, the old gymnasium known as "Noah's Ark" was torn down and replaced by Kendall Hall, named after Nate Kendall, the late governor of Iowa. Flavin Hall was torn down to provide space for a new two-story building which opened in 1957 and included a chapel, six classrooms, four science laboratories and a library.

In 1963, Bishop Edward C. Daly authorized the first study into Dowling’s future needs and potential new sites. Bishop George J. Biskup announced in 1966 that 55 acres of land had been purchased by Dowling at the intersection of I-235 and Eighth Street in West Des Moines. In 1969, the Diocesan School Board decided to build a new school at this site.
Back