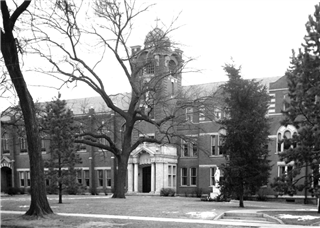 In 1884, St. Joseph Academy was founded by the Sisters of Charity of the Blessed Virgin Mary. Housed in a renovated building called “Villa Maria,” few students were able to attend this "country school" located three miles west of downtown Des Moines due to limited public transportation.
St. Joseph's first graduating class numbered only one, but enrollment quickly grew to 16 girls who were taught by six Sisters of Charity, led by Sister Mary Baptist Seely. The "Villa Maria" was eventually moved to the rear of the school's property and a building which housed a library, classrooms and a hall was built. In 1907, an auditorium, music hall and chapel were added.

In 1909, with enrollment at 62, the Most Rev. Austin Dowling, the first bishop of Des Moines, designated St. Joseph Academy as the Central Catholic High School for girls in Des Moines. In 1912 an alumnae association formed which donated many gifts to St. Joseph Academy throughout the years, including a pipe organ for the chapel and a statue of Our Lady of Grace for the grotto.

In 1963, a $1.2 million addition to the Academy was made consisting of 28 classrooms, two science laboratories, a library and a cafeteria. In 1971, the decision was made to merge with Dowling High School. The College of Osteopathic Medicine, currently known as Des Moines University, purchased the Academy facilities.
Back